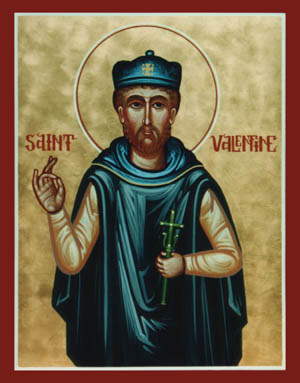 Around 1928, when I was in the second grade, a good part of the winter was spent constructing what I recall as a fantastic make-believe classroom post office so that we little ones could draw, write, and mail valentines to one another, have them posted, sorted, and finally delivered by one another to mailboxes just as we learned occurred in the regular postal service. I remember that the protracted activity was huge, exciting fun, especially when I took my turn as postmaster, collecting and disbursing play stamps and play money.

Even then, seventy years ago, ...Saint Valentine’s Day was a big event in the life of a child, but I don’t recollect that there was any commercialization of the holiday in our out-of-the-way town. No radio or TV there, no neon lights, hype, or advertising downtown that I can remember. Kids made their own valentines to send, usually had no money to buy them, and therefore the entire extended drawing, writing, mailing, posting, and delivery concept seems to me even now to have been a worthwhile educational experience.

Winter life in northern Idaho could be gloomy in those days — cloudy days, three to four feet of snow, ice, and miserable weather keeping kids indoors most of the time. Very few people operated automobiles — there was nowhere to go anyway — and most business transportation took place on sleighs. Besides, it was bitter cold, there were no school buses, and when you walked, as you had to, you risked frostbite. Children arrived at school crying from the severe wind and chill.

Today the weather is warmer, automobiles abound, and the holiday has grown into an exaggerated commercial frenzy, overcapitalizing on romantic love and on boy-girl relationships at an ever earlier age. It feeds the sentimentalism and excessive sexual awareness, even perhaps the promiscuity, that categorize modern American society. This direction of things has pretty much eliminated the “Saint” in “Saint Valentine’s Day,” and it is usually identified as simple “Valentines Day.”

Yes, Virginia, there was and is a real Saint Valentine who as an early Christian martyr, who has taken his place in the heavenly mansions prepared by the Savior for those who love Him. He lived in Rome and so long ago when persecutions racked the Church of Christ, that virtually nothing is known of his earthly life. He is said to have been the Bishop of Terni (Interamna) in Italy, which we can accept as accurate. The Orthodox Church recognizes Saint Valentine (Valentinus) as a hieromartyr and celebrates his name day on July 30. In the West his name day was celebrated on February 14, now Valentines Day, with or without religious significance. The word “valentine”, of course, denotes a card or letter expressing one’s love and affection for a person of the opposite sex, regardless of the quality of that love and affection. Sending a valentine may also involve flowers, candy, and other gifts.

Since Saint Valentine was a real person and a real martyr for the faith, the Orthodox Church recognizes at least two Saint Valentines (although they may be doublets): Saint Valentinus of Terni (Interamna) in Italy, bishop and hieromartyr, celebrated on July 30, and Saint Valentinus, an unidentified martyr, celebrated October 24. It should be noted that the Roman Catholic Church has lost confidence in the existence of hosts of early saints, including the great wonderworker, Saint Nicholas, and a few years ago decided to drop them from their official calendar. (This upset a lot of people.) Since the Saint Valentine’s lived and died during the Roman persecution of the second century, no details of their lives have come down to us. Although the Saint Valentine’s were western saints and not particularly popular in the east, “Valentine” is or was a fairly common name among the Russians. Orthodoxy has always recognized them as true martyrs for the Faith.

Nothing about these saints provides grounds for associating them with the romantic love expressed in cards and letters adorned with hearts and sent to loved ones on February 14, a widespread practice which now characterizes this holiday. It has been suggested that it is an aberration of a saint’s feast that originated either in some earlier pagan love ritual or, in later centuries, the observation that birds pair off around February 14, the saint’s western name day.

As Father Metalinos, who is a spokesman for the Church of Greece, is quoted in the Serbian newspaperPravoslavije as saying, that the commercialized feast of Saint Valentine has invaded Greece as a “holy day of love” on February 14, and is regarded as a definitely unwelcome foreign import. The Romanian Archbishop Andrew reports in the same newspaper that the cult of Saint Valentine and the “festival of love” associated with his name, which is foreign to Romanian spirituality, is spreading in Romania, also as an unwelcome import.

Nevertheless, the memory of the real Saint Valentine deserves to be held in honor in recognition of the hieromartyr that he is. Given that his name has unfortunately also been conferred upon tokens and practices that are being abused by people today, it seems important that we attempt to discover some overriding element of spiritual truth in the legend about him that has come down to us.
Legends, we should understand first of all, are sometimes unjustifiably equated with untruths or very unlikely truths. The word, coming from Latin, simply means “that which is to be read.” Therefore, legends were originally found in books and records written some time after the actual events took place. Some legends probably contain some truth, others may be apocryphal and unverifiable, and still others are undoubtedly fabrications.
The Saint Valentine legend is one that strikes this writer as possessing at least a few grains of truth. It is easy to appreciate how the events described could have taken place. Valentinus, the hero of the legend, lived in the time of Claudius Caesar, Emperor of Rome in the second century A.D. Claudius had ordered the entire Roman population to worship twelve pagan gods, and made it a capital crime to associate with Christians. Since Valentinus would not stop practicing his faith, he was arrested and thrown into prison.

Roman prisons were not exactly like modern prisons. Prisoners often had some freedom. The jailer in this case recognized that Valentinus was an honorable man and a learned one too. Therefore he inquired of Valentinus if he would instruct his blind daughter, Julia, who was young and anxious to learn.

Valentine read stories of Rome to her and described the world of nature which surrounded her. We can be sure, too, that he told her about God. Julia began to see the world through the eyes of Valentinus and found spiritual comfort in his spiritual strength.

Julia wondered if God really hears our prayers, and Valentinus assured her that He does, provided it is for our greater spiritual good. She said she was now praying every morning and night that she might see everything that Valentinus had told her about the world. Then one day as they sat together praying, a brilliant light flashed in Valentinus’s cell. Julia shouted, “Valentinus, I can see! I can see!”.
On the eve of his martyrdom, Valentinus wrote a letter to his pupil, urging her to stay close to God in prayer. Without any further expression of affection he signed it, “From your Valentinus.”
Valentinus, the martyr, gave up his spirit the next day, February 14, 270 A.D., near the gate that was later named Porta Valentini (The Gate of Valentine). His relics were buried in what is now the Church of Praxedes in Rome.

Valentinus had written a letter to Julia committing her to Christ. In return, Julia herself is said to have planted a pink-blossomed almond tree near his resting place. Today the almond tree remains a symbol of abiding love and friendship, and the valentine remains a token of affection, love, and devotion.

Glory be to God for all good teachers of all times!